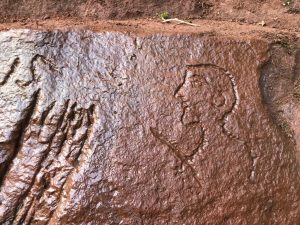 We were approached by Newcastle University in 2018 to see if it was possible to assist with the recording of ancient Roman inscriptions in Gelt Woods Nr Brampton.  Early in 2019 the works started.

The works had to include being able to get an archaeologist from the University onto the cliff face to take in the region of 2000+ images of the inscriptions in order to be able to build up a 3D recording.

The use of our CASDECK system proved to be very useful.

Our initial works were to clear the area of existing vegetation and in doing so we revealed inscriptions which have not been seen for 1800 years, these included a left facing head and a phallus.

The discovery of these inscriptions meant the worlds press now had an interest in Gelt Woods.  The story went global and the following day it was run in the UK, Asia and the USA.

Below are some of the reports:

we'd love to hear from you. if you'd like a quote or just have a question, get in touch with us...